Funeral arrangement under the care of
Davis Strickland Funeral Home

It is with great sadness that we announce the death of Verna Mea Mitchell (Dermott, Arkansas), who passed away on April 1, 2021, at the age of 88, leaving to mourn family and friends.
She was born on Monday, May 30, 1932 to Charlie Johnson and Minnie Mae Bateman Johnson. She was the oldest daughter out of six children.
Verna moved from Hudspeth, AR to Dermott, AR in search for better opportunities and a chance to flourish. She was introduced to Christ at Pleasant Grove Baptist Church in Jerome, AR She later joined Calvary #1 Missionary Baptist Church were she remained a faithful member for over 50 years until her death .
She married her childhood sweetheart, Willie Cobb . She worked for many years at the Dermott Memorial Hospital in Dermott, AR until it closed in the mid- 80s. Later, she gained employment working as a Dietary Aide for various business in Dermott. She also worked for Dermott Police Department alongside the front end clerical department as assistant jailer and groundskeeper. Mother Mitchell worked throughout the Dermott Public School System for over 14 years in variety positions, ultimately retiring in 2015 while working in the foster grandparent program .
After being an entrepreneur, self sufficient individual she soon grew lonely and was fortunate to find love again, reuniting with a friend from her past who she adored for many years. To this bliss, Charlie Mitchell, Sr and mother Verna united in Holy Matrimony in 1997.
Mother Mitchell had a passion for caring for others (occasionally more than she received) She truly had a heart of gold. She was well respected and recognized in the Dermott community.
She worked diligently in the church . She was a member of the church choir and was eventually appointed as a Mother of the church. She accepted the title with great pride and respect. She carried out every task she was assigned.
Mother greatest joys were spending time with family and friends. She enjoyed cooking cakes, gardening, reading, and studying the bible. She loved watching variety of tv shows like "Family Feud" and Let's Make A Deal, "Gunsmoke " and also "Heat of the Night." She also enjoyed talking to family and friends on the telephone. She didn't have a gift of gab, but eagerly listened to others' excitement from their story telling. She was modest and slightly a shy women, but when she was upset , she had no problem letting you know how she felt and in the utmost respectful manner.
Mother Mitchell answered God's call from earth to heaven on Thursday, April 1, 2021 at Dermott City Nursing Home. She preceded in death by her parents, Charlie Johnson and Minnie Mae Bateman -Johnson; a son, Ricky Earl Johnson; four siblings, Charlie Johnson Jr, Earnestine Johnson, Jessie Lee Whitaker, Barbara Jean White; and a son -in-law, Willie Shannon.
Mother leaves to cherish her memories: her children, Tommie Lee (Gloria) Johnson of Anchorage, Ak, Sandra Faye Shannon of Dermott, AR, Don Robert Cobb of Pine Bluff, AR, Bealvie Ann Banks (Earnest) of Beloit, WI, Terry Lee Brown of Dermott, AR Rodney "Ronnie" James Johnson of Beloit, WI, and Connie Cobb- Pitts of Dermott, AR; her sister, Minnie Beatrice Johnson of Pine Bluff , AR; 28 grandchildren; 59 great-grandchildren; 9 great- great- grandchildren; along with a host of nieces, nephews, cousins, and friends.
Active Pallbearers:
Tracy Dunn, Chester Dunn, Andrew Jones, Freddie Hokes, Sam Nelson Jr, Kendrick Richardson, Theodis Jones Jr and Michael Whitaker.
Honorary Pallbearers:
Don Cobb, Terry Brown, Tommie Johnson and Rodney Johnson.
Leave a sympathy message to the family on the memorial page of Verna Mea Mitchell to pay them a last tribute. You may also light a candle in honor of Verna Mea Mitchell.

Funeral arrangement under the care of
Davis Strickland Funeral Home 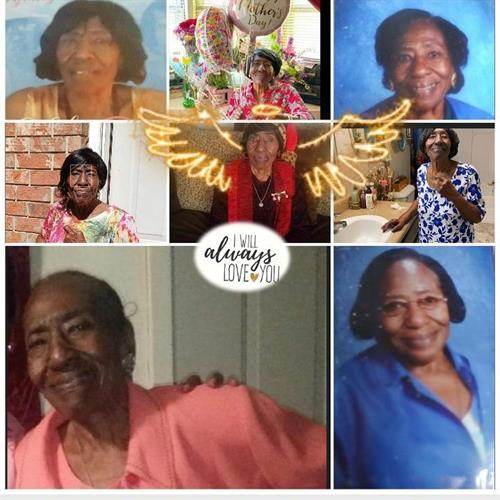 Here are the tributes to Verna Mae Mitchell.

Would you like to offer Verna Mae Mitchell’s loved ones a condolence message? Write your message of sympathy today.