Funeral arrangement under the care of
Krueger Family Funeral Home

It is with great sadness that we remember the death of Daniel James Reilly III (Blue Island, Illinois), born in Buffalo, New York, who passed away on July 15, 2019, at the age of 99, having enriched the lives of family and friends. Daniel is apart from us for several years now but his place, his stories and his remembrances continue to fill our thoughts and prayers.

Also, I miss 'winning' all those arguments over the years. I expect he will be waiting at the pearly gates with a list to discuss !

He is the smartest man I have ever met, and I have met a few. He is an original Boy Scout with a life-long devotion to Scouting service as a Scout leader and Scout naturalist. He was an Eagle Scout and mirrored those values in daily life.

As a Sergeant in WWII, while on a flight back to Britain, he once overruled a superior officer who attempted to preempt the pilot when they arrived during a blackout. If he had not convinced the pilot that he was the captain of the ship, that 'superior officer' would have gotten them all a watery death. He risked reprimand as he knew his sense of direction was correct. He was watching the natural signs, not depending on 'lights'. Similarly, he always shared his inner spiritual compass with the young through stories and tribal re-enactments. His creative mind knew and shared wonder like this was always the way to see life.

My own parents became wonderful friends and treasured the gift of the Reilly story added to our own family. His Catholic faith was his spiritual comfort and strength. His life's love, Marion, was his barometer and loves focus. His family was his unending joy always gathering his grandchildren and great-grandchildren around him to magically tell his many stories.

When you looked to the stars along with him, he unravelled wonder.

So now when my own grandchildren play with me, I bless him. As I watch the stars I recall his sense of wonder. In nature, I can see his arm directing my sight to the hidden birds and wandering creatures. He related accurately each creatures coloring, even though he, himself, was color blind.
I do truly miss him. And when my time comes to join our eternal family, I look forward to reviewing his list. We shall truly laugh together in wonder.

Funeral arrangement under the care of
Krueger Family Funeral Home 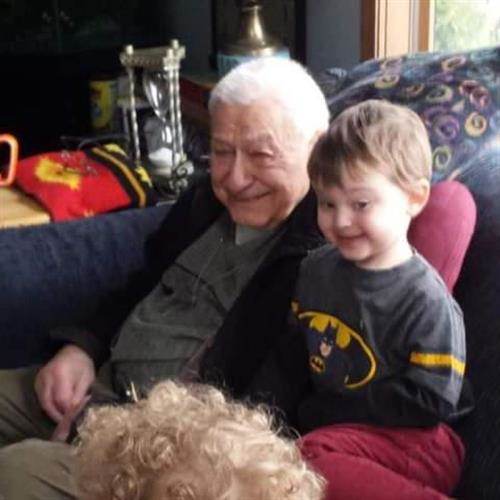 Would you like to offer Daniel J James Reilly III’s loved ones a condolence message? Write your message of sympathy today.

There are no events at this time. If you know of an upcoming event for Daniel J James Reilly III, please add one.